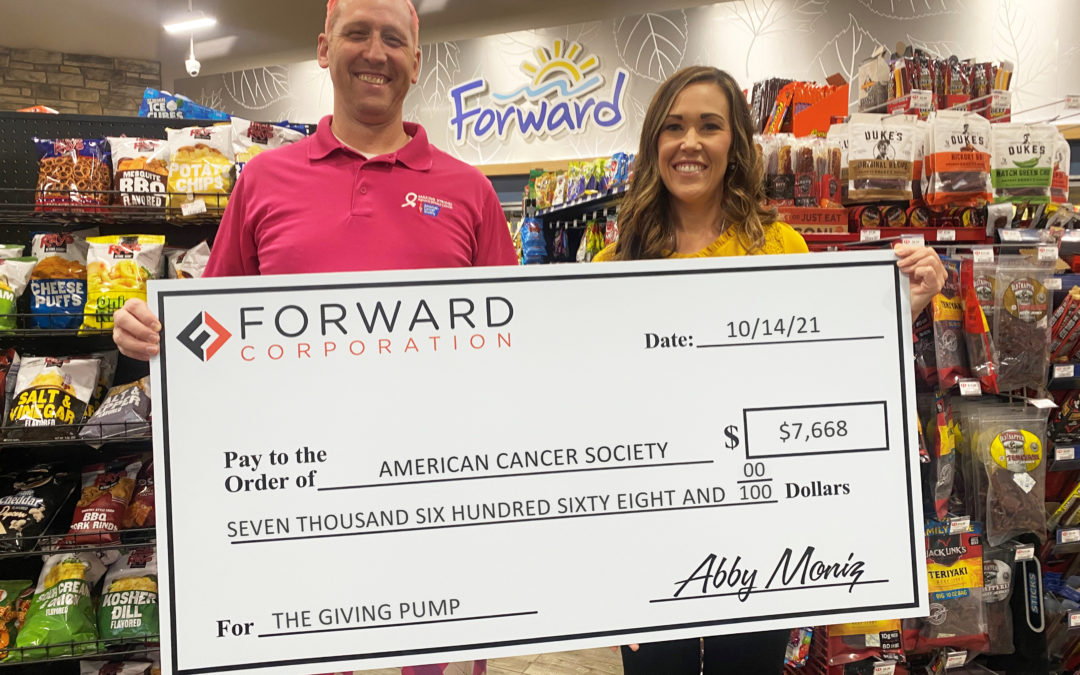 Forward Corp. announced today the Giving Pump program at its Shell convenience stores raised over $7,000 for the American Cancer Society (ACS) and its fight to end childhood cancer.

As part of Shell’s national Giving Pump program, one pump at all 26 Forward Shell convenience stores was designated as the “Giving Pump” with Forward pledging to donate 1¢ for every gallon dispensed at it during the months of Aug. and Sept. A total of 766,809 were dispensed, yielding a donation of $7,668.

“We are thrilled with the results of the Giving Pump,” said Jeff Larsen, senior development manager for ACS. “Not only did this endeavor raise critical funds to address childhood cancer, but the many messages we received throughout the campaign of people excited to be participating were very moving. Forward is a fantastic partner that we’re incredibly excited to work with.”

The designated Giving Pump dispenser at each store was adorned with graphics that identified it as the Giving Pump and noted the American Cancer Society as Forward’s charitable partner of choice. Through the program, Forward was given the choice to select a partner organization that would benefit children and/or their families.

“Cancer impacts almost everyone in some way and when it impacts a child it is particularly devastating,” said Abby Moniz, Forward Corp. president. “We’re proud to partner with ACS and know this donation is one step closer to finding a cure.”

About the American Cancer Society:
The American Cancer Society is a global grassroots force of 2 million volunteers saving lives in every community. As the largest voluntary health organization, the Society’s efforts have contributed to a 25 percent decline in the cancer death rate in the U.S. since 1991, driven by less smoking, better treatments, and earlier detection. We’re finding cures as the nation’s largest private, not-for-profit investor in cancer research, ensuring people facing cancer have the help they need and continuing the fight for access to quality health care, lifesaving screenings and more. For more information, to get help, or to join the fight, call us anytime, day or night, at (800) 227-2345 or visit cancer.org.